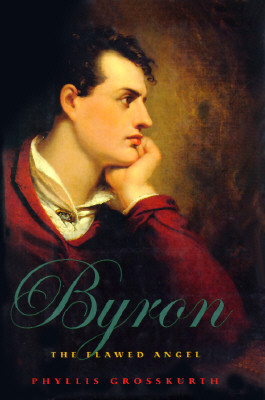 George Gordon, Lord Byron was born with a deformed foot. He was manic-depressive, athletic, and erotic. He embodied the romantic, revolutionary, patriotic, and free-living life of poetry as no one before him. He was the greatest artistic celebrity of his time, inspiring composers and poets, moving among eminences. Genuinely bisexual, he was involved in affairs with fellow students at Harrow and Cambridge. He fathered children on chambermaids, was incestuously involved with his half-sister, married a woman who soon left him. He was linked with the scandalous Caroline Lamb, with Mary Shelley's half-sister Claire Clairmont, with the married Countess Teresa Guiccioli in Ravenna. Constantly in debt, he traveled in Portugal, Spain, Turkey, Greece, Albania, and Italy, as though he could feel truly alive only in exile. The first publication of "Childe Harold's Pilgrimage" in 1812 made him famous, if not rich. He joined forces with Shelley in Italy just before Shelley drowned at sea; he undertook his poetic masterpiece, Don Juan, in Italy and then joined the Greek forces revolting against the Turks. His death of fever in 1824 served as a rallying cry for the 1830 revolutions. This brilliant, handsome, charismatic psychological misfit exerted an inestimable impact on the Romantic movement and the sensibility of the entire nineteenth century.