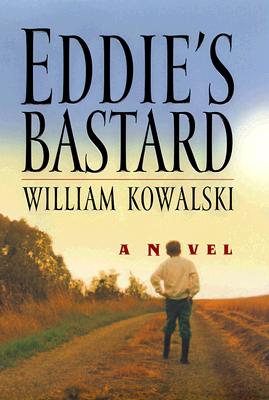 "There was something irrevocably different about my life, about who I was and how I came to be, that made me nothing like other kids my age; and what was more, it was too late to do anything about it. It had always been too late, in a sense. . . ."

In this rich, deeply resonant literary debut, twenty-eight-year-old William Kowalski explores the power of family, the meaning of history, and the bonds of individuals united and shaped by love--a wondrous novel in the grand storytelling tradition of John Irving and Wally Lamb.

"Eddie's Bastard" is one William Amos Mann IV, fondly known as Billy, the illegitimate blue-eyed son of "Ready Eddie" Mann--a legendary golden athlete and brave pilot killed in Vietnam--and an unknown mother. The last in a line of proud, fiercely individualistic Irish-American men, Billy is discovered in a basket on the doorstep of the once grand farmhouse that is his ancestral family home, now a dusty, haunted mansion. The sole inhabitant is Billy's grandfather, Thomas, a bitter and lonely recluse who will raise Billy on love, fried baloney sandwiches, and the fascinating lore of the Mann family itself. While his birth may have been inauspicious, Billy's life is destined for greatness. He is a Mann, Grandpa reminds him daily, the progeny of an indomitable family scarred by success and tragedy.

Through the whisky-tinged tales of his grandfather, Billy learns how the clan's fortune was discovered by his great-great-grandfather and namesake, Willie, a hero of the Civil War, and how it was lost by Thomas himself, a veteran of World War II, in a scheme known as the Great Ostrich Fiasco of 1946. As he matures into adolescence, Billy will eventually capture these stories on paper, a tradition begun by his great-great-grandfather, who confessed his secrets in a journal he kept throughout his life.

Through the tales of his ancestors and his own experiences, Billy learns of bravery and cowardice, of life and death, of the heart's capacity for love and for unremitting hatred, eventually grasping the meaning and true beauty of family and history and their power to shape destiny. Here, too, are the unforgettable people who will indelibly mark him, including the generous and loving Dr. Connor, his grandfather's best friend and the man who holds the key to the secrets of Billy's past and the promise of his future; the charmingly offbeat Shumachers, a "loud, Teutonic, and vibrantly healthy" tribe of Pennsylvania Dutch farmers who care for young Billy when his grandfather is hospitalized after a freak accident; Elsie Orfenbacher, a ripe, energetic woman who will later introduce him to the pleasures of manhood; and the love of Billy's life, Annie Simpson, an ethereal girl with a dark mystery that will first bring them together and then threaten to drive them apart.

A novel of discovery, of a young man's emergence into the world and the endless possibilities for greatness it offers, Eddie's Bastard is a luminous reading experience, a novel steeped in imagery and lyricism that marks the debut of a talented new writer.

"My life has been made of stories from beginning to end, and just when it seems one is ending, a new one begins. The world itself is woven of stories, each man and woman and child of us threading our own brightly colored tale into the bigger story that was already being told as we were born, and that will continue to be woven by others long after our threads have run out..."
-- from Eddie's Bastard