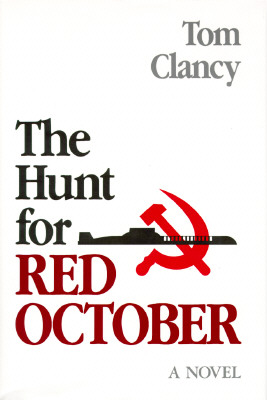 The Hunt for Red October

Also Availble as an Audio Edition from Audible via Amazon

Tom Clancy's rich imagination and his remarkable grasp of the capabilities of advanced technology give this novel an amazing ring of authenticity. It is a thriller with a new twist, a "military procedural" with an ingenious, tightly woven plot that revolves around the defection of a Soviet nuclear submarine--the USSR's newest and most valuable ship, with its most trusted and skilled officer at the helm.

A deadly serious game of hide-and-seek is on. The entire Soviet Atlantic Fleet is ordered to hunt down the submarine and destroy her at all costs. The Americans are determined to find her first and get her safely to port in the intelligence coups of all time. But the Red October has a million square miles of ocean to hide in and a new silent propulsion system that is impossible to detect. Or is it?

Her daring and cunning captain, Marko Ramius, thinks so. The commander of the Soviet's fastest attack submarine, however, is confident that he will find his prey. And Bart Mancuso, the aggressive commander of the U.S. Navy attack sub the Dallas, is counting on the sensitive ears of his resourceful young sonar operator to identify Red October's unique sound print and track her down.

The nerve-wracking hunt goes on for eighteen days as the Red October stealthily eludes her hunters across 4,000 miles of ocean. But just short of Ramius's objective, his submarine converges with the others in a rousing climax that is one of the most thrilling underwater scenes ever written. Can the start of all-out war be avoided? The outcome is clear only on the very last pages.

Title: The Hunt for Red October

The Hunt for Red October