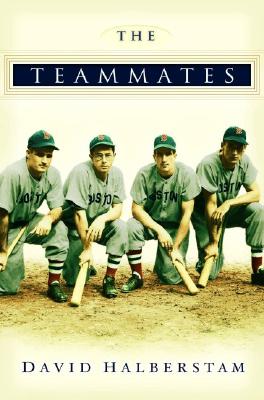 The Teammates : A Portrait of Friendship

Signed not inscribed by the author on the title page.

Ted Williams, Bobby Doerr, Dom DiMaggio, and Johnny Pesky were all members of the famed 1940's Boston Red Sox. Their legendary careers led the Red Sox to a pennant championship and ensured the men a place in sports history. David Halberstam, the bestselling author of the baseball classic Summer of '49, has followed the members of the 1949 championship Boston Red Sox team for years, especially Williams, Doerr, DiMaggio, and Pesky. In this extremely moving book, Halberstam reveals how these four teammates became friends, and how that friendship thrived for more than 60 years. The book opens with Pesky and DiMaggio travelling to see the ailing Ted Williams in Florida. It's the last time they will see him. The journey is filled with nostalgia and memories, but seeing Ted is a shock. The most physically dominating of the four friends, Ted now weighs only 130 pounds and is hunched over in a wheelchair. Dom, without even thinking about it, starts to sing opera and old songs like 'Me and My Shadow' to his friend. Filled with stories of their glory days with the Boston Red Sox, memories of legendary plays and players, and the reaction of the remaining three to Ted Williams' recent death, The Teammates offers us a rare glimpse into the lives of these celebrated men-and great insight into the nature of loyalty and friendship.

Title: The Teammates : A Portrait of Friendship

The Teammates : A Portrait of Friendship