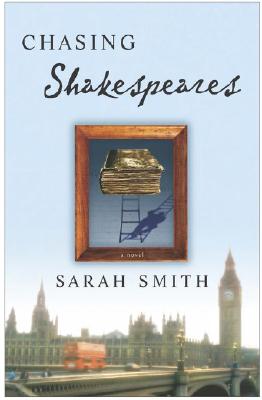 The author signs on the title page and inks a sketch of Shakespeare as well.

From an author the "San Francisco Chronicle" hails as "daring and splendid" comes an exhilarating novel of passion and ideas that cuts to the heart of one of literature's most fascinating and enduring mysteries: the enigma of Shakespeare.

Meet Joe Roper, tough-minded young graduate student, who has been lucky enough to land a job cataloging the famed Kellogg Collection of Elizabethan texts and curiosities. Joe's been passionate about Shakespeare since he read a duct-taped paperback at age nine and found the witches, warriors, murders, and ghosts as much fun as Stephen King, but his working-class roots make him a fish out of water in the academic world. He is seemingly as far from adventure as it's possible to be -- until the delicious Posy Gould enters, stage right. A glamorous rising star at Harvard, she insists that a letter Joe has found, signed by one

W. Shakespeare of Stratford, is a career-making discovery for them both -- because the letter says Shakespeare didn't write the plays.

To Joe's mind, the letter is a forgery. When Posy insists they test it, the two literary sleuths head for England to prove their clashing theories. But they find themselves in a world where the London Eye looks out over Shakespeare's city, Hollywood producers rub elbows with Elizabethan spies, and mystery shadows the heart of Westminster Abbey and the lanes of rural England. And Joe and Posy find that, when you start chasing Shakespeares, what you find is not only who he was, but who you are, and how far you're willing to go....

A first-rate mystery from one of the masters of the genre, "Chasing Shakespeares" is also a literary shell game, a love story, and a profound meditation on identityand ownership. Sarah Smith has created a novel that rivals A. S. Byatt's Possession in its rich and fast-moving blend of literary history and page-turning suspense.