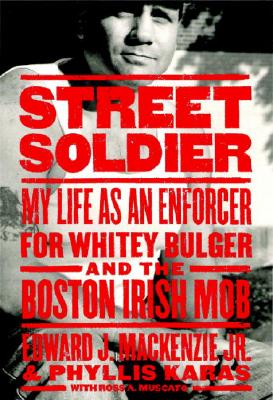 Street Soldier : My Life As an Enforcer for Whitey Bulger and the Irish Mob

For decades the FBI let James Whitey Bulger get away with murder, allowing him continued control of his criminal enterprise in exchange for information. He went on the lam in 1995 and today follows top-ranked Osama bin Laden on the FBI s Ten Most Wanted List.
Edward J. MacKenzie, Jr. was a drug dealer and enforcer who would do just about anything for Bulger. In this compelling eyewitness account, Eddie Mac delivers the goods on his one-time boss and on such former associates as Stephen The Rifleman Flemmi and turncoat FBI agent John Connolly.
Street Soldier is also a story of the search for family, for acceptance, for respect, loyalty, and love. Abandoned by his parents at the age of four, Mackenzie became a ward of the state, suffered physical and sexual abuse, and eventually drifted into Bulger s orbit.
The Eddie Mac who emerges in these pages is complex: An enforcer who was also a national kick-boxing champion; a womanizer who fought for custody of his daughters; a kid never given much of a chance who went on, as an adult, to earn a college degree in three years; a man who lived by a strict code of loyalty but also helped set up a sting operation that would net one of the largest hauls of cocaine ever seized.
Street Soldier is as disturbing and fascinating as a crime scene, as heart-stopping as a bar fight, and at times as darkly comic as Quentin Tarantino s Pulp Fiction or Martin Scorsese s Good Fellas."

Title: Street Soldier : My Life As an Enforcer for Whitey Bulger and the Irish Mob

Street Soldier : My Life As an Enforcer for Whitey Bulger and the Irish Mob