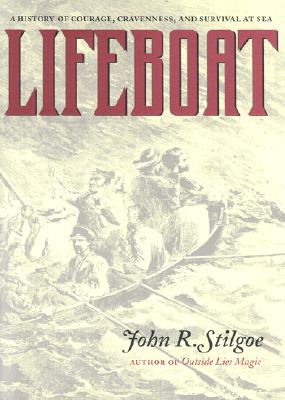 Signed by the author on the title page. Some Steinbeck references from Sea of Cortez. pp 49-50

The fire extinguisher; the airline safety card; the lifeboat. Until September 11, 2001, most Americans paid homage to these appurtenances of disaster with a sidelong glance, if at all. But John Stilgoe has been thinking about lifeboats ever since he listened with his father as the kitchen radio announced that the liner Lakonia had caught fire and sunk in the Atlantic. It was Christmas 1963, and airline travel and Cold War paranoia had made the images of an ocean liner's distress--the air force dropping supplies in the dark, a freighter collecting survivors from lifeboats--seem like echoes of a bygone era.

But Stilgoe, already a passionate reader and an aficionado of small-boat navigation, began to delve into accounts of other disasters at sea. What he found was a trunkful of hair-raising stories--of shipwreck, salvation, seamanship brilliant and inept, noble sacrifice, insanity, cannibalism, courage and cravenness, even scandal. In nonfiction accounts and in the works of Conrad, Melville, and Tomlinson, fear and survival animate and degrade human nature, in the microcosm of an open boat as in society at large.

How lifeboats are made, rigged, and captained, Stilgoe discovered, and how accounts of their use or misuse are put down, says much about the culture and circumstances from which they are launched. In the hands of a skillful historian such as Stilgoe, the lifeboat becomes a symbol of human optimism, of engineering ingenuity, of bureaucratic regulation, of fear and frailty. Woven through Lifeboat are good old-fashioned yarns, thrilling tales of adventure that will quicken the pulse of readers who have enjoyed the novels of Patrick O'Brian, Crabwalk by G nter Grass, or works of nonfiction such as The Perfect Storm and In the Heart of the Sea. But Stilgoe, whose other works have plumbed suburban culture, locomotives, and the shore, is ultimately after bigger fish. Through the humble, much-ignored lifeboat, its design and navigation and the stories of its ultimate purpose, he has found a peculiar lens on roughly the past two centuries of human history, particularly the war-tossed, technology-driven history of man and the sea.