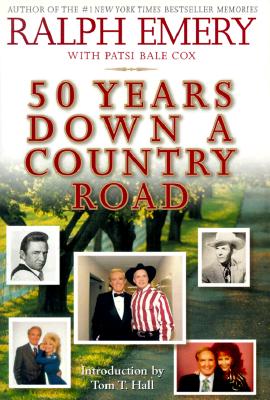 50 Years Down a Country Road

Ralph Emery begins by delving deep into the roots of country through the reminiscences of such luminaries as Eddy Arnold, Tex Ritter, and Tennessee Ernie Ford. He enters the 1950s by examining how the life and death of Hank Williams forever changed Nashville. This decade also launched such stars as Hank Snow, Marty Robbins, Hank Thompson, Carl Smith, Jim Reeves, and Kitty Wells.

Emery brings back the 1960s -when writerartists such as Willie Nelson, Don Gibson, Roger Miller, and Johnny Cash proved that Nashville was truly Music City USA. He examines the colorful and contradictory Patsy Cline, the most influential woman in country's history. He talks with Bobby Bare, who set the stage for the '70s outlaws by taking control of his recording in the '60s. In the 1970s, Kris Kristofferson came to Nashville and revolutionized songwriting. Tom T Hall's compositions became the standard to which all "three-minute movie" songs would be held. Mel Tillis, Charley Pride, and Ronnie Milsap succeeded despite incredible odds. America fell in love with George Jones and Tammy Wynette and were brokenhearted when they became yet another divorce statistic.

In the 1980s, the pop-country sound rocketed stars such as Anne Murray, Kenny Rogers, and Alabama to the top of the charts. Emery discusses three Of country's biggest female superstars, Dolly Parton, Barbara Mandrell, and Reba McEntire, as well as the traditionalist revival led by George Strait, Ricky Skaggs, and Randy Travis. Finally, he looks back at the past ten years, when phenomenal artists including Garth Brooks, Trisha Year-wood, Shania Twain, and Faith Hill helped sell more records than the country music industry ever dreamed possible.

50 Years Down a Country Road is a must for all country music fans.

Title: 50 Years Down a Country Road

50 Years Down a Country Road