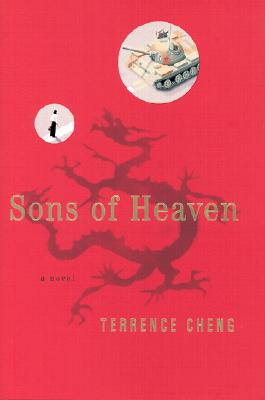 Sons of Heaven : A Novel

Remainder mark on the bottom edge.

"Sons of Heaven"" is an epic novel set against the backdrop of one of modern history's most haunting events: the Tiananmen Square Massacre. In June of 1989, the world watched in horror as China's military was mobilized to suppress a student movement that stood for peaceful democracy. Hundreds were killed; others say into the thousands. No one knows for sure.

But the image that remains most powerful is that of a lone young man, looking confused yet terribly brave, as he held his ground before a rolling line of tanks. Who was he, and why did he do what he did? No one has ever been able to determine his identity or fate. Within the pages of "Sons of Heaven," in a stunning blend of history and fiction, Terrence Cheng has vividly created for this young hero a life, and given him a voice.

Cheng constructs the young man's life as he goes away to America to complete his education. He falls in love with a beautiful young American girl who opens to him a free life filled with opportunity. When he returns to China he becomes embittered and disillusioned; only the potential for political change seems to revive him. Also portrayed is the story of the young man's older brother, an ardent member of the Red Army, who is ordered to capture his sibling. In the end, their political differences turn deadly. On one level this is a novel of history as played out in modern China, but first and foremost, it is about the universal ties of family and the difficult process of boys learning to become men.

Cheng also scrutinizes the life and history of Deng Xiaoping, China's leader who is suspected of giving the final order to turn the People's Army against its own people. What historical and politicalfactors affected his decisions that fateful summer? Was Deng the monster that the world made him out to be?

An unsettling and powerfully lacerating story of family, faith, and courage, "Sons of Heaven" weaves the lives of peasants and soldiers, politicians and gods, into a timeless snapshot of one of history's most memorable and heartrending events. With this unforgettable, psychologically acute novel, Terrence Cheng confirms that he is a daring and important new voice in fiction.

Title: Sons of Heaven : A Novel

Sons of Heaven : A Novel