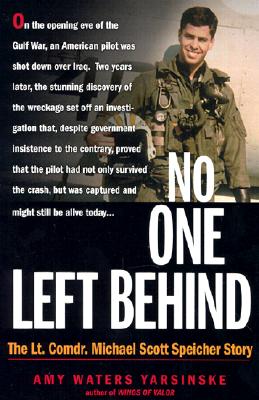 No One Left Behind : The Lt. Comdr. Michael Scott Speicher Story

Around midnight on January 16, 1991, Lt. Comdr. Michael Scott Speicher launches from the deck of the USS Saratoga in the Red Sea, his F/A-18 Hornet among those participating in the very first air strike of the Persian Gulf War. It is a mission he wasn't initially scheduled to fly -- and from which he would not return. Moments after an assault by an Iraqi MiG-25, Speicher's plane vanishes over the Baghdad desert. The next day, Secretary of Defense Dick Cheney and Chairman of the Joint Chiefs of Staff Colin Powell tell the public that Speicher was the first casualty of the Gulf War. He is listed as Killed in Action/Body Not Recovered. His young wife and family are devastated.

In December 1993, pieces of a wrecked F/A-18 are confirmed to be Speicher's downed Hornet. A military investigation begins soon after and in December 1995, a full two years after the plane's discovery, the International Committee of the Red Cross leads an American investigative team to the crash site to determine what happened to Scott Speicher. On January 10, 2001, on the basis of reemerging evidence, Speicher is officially declared Missing in Action, the first time in history that a U.S. serviceman's status has ever been changed.

Tracking this explosive story for the past eight years, Amy Yarsinske interviewed top government and military officials, diplomats, pilots, informers, and Iraqi defectors. The result is a stunning true account of the denials and cover-ups that obscured an essential fact: Speicher actually survived. In No One Left Behind, she takes readers behind the intrigue and the lies to solve this eleven-year-old mystery and unearth the truth of what really happened that dark night over Iraq in1991.

Title: No One Left Behind : The Lt. Comdr. Michael Scott Speicher Story

No One Left Behind : The Lt. Comdr. Michael Scott Speicher Story