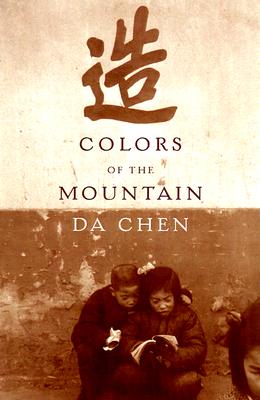 Colors of the Mountain

"I was born in southern China in 1962, in the tiny town of Yellow Stone. They called it the Year of Great Starvation."
In 1962, as millions of Chinese citizens were gripped by Mao Zedong's Cultural Revolution and the Red Guards enforced a brutal regime of communism, a boy was born to a poor family in southern China. This family--the Chens--had once been respected landlords in the village of Yellow Stone, but now they were among the least fortunate families in the country, despised for their "capitalist" past. Grandpa Chen couldn't leave the house for fear of being beaten to death; the children were spit upon in the street; and their father was regularly hauled off to labor camps, leaving the family of eight without a breadwinner. Da Chen, the youngest child, seemed destined for a life of poverty, shame, and hunger.
But winning humor and an indomitable spirit can be found in the most unexpected places. Colors of the Mountain is a story of triumph, a memoir of a boyhood full of spunk, mischief, and love. The young Da Chen is part Horatio Alger, part Holden Caul-field; he befriends a gang of young hoodlums as well as the elegant, elderly Chinese Baptist woman who teaches him English and opens the door to a new life. Chen's remarkable story is full of unforgettable scenes of rural Chinese life: feasting on oysters and fried peanuts on New Year's Day, studying alongside classmates who wear red armbands and quote Mao, and playing and working in the peaceful rice fields near his village.
Da Chen's story is both captivating and endearing, filled with the universal human quality that distinguishes the very best memoirs. It proves once again that the concerns of childhood transcendtime and place.

Title: Colors of the Mountain

Colors of the Mountain