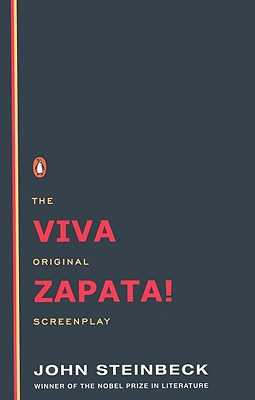 " The original screenplay", edited and signed by Robert E. Morsberger on the title page.

An Academy Award-nominated screenplay from the winner of the Nobel Prize in Literature.

The hitherto unpublished script for Viva Zapata was written by John Steinbeck between 1948 and 1950; it is his only completely original screenplay. The film, directed by Elia Kazan and released by Twentieth Century-Fox in 1952, garnered several Academy Award nominations: best story and screenplay for Steinbeck, best actor in the title role for Marlon Brando, and best supporting actor for Anthony Quinn, who won for his role of Eufemio. This classic film and story about the part played by Emiliano Zapata in the Mexican Revolution, championing the cause of the peasants during the years between 1909 and 1919, treats themes familiar to readers of The Grapes of Wrath and In Dubious Battle. In his perceptive introductory essay, Robert E. Morsberger states that the screenplay puts into final focus issues with which Steinbeck had been concerned for the previous twenty years and "clarifies the relationship of issues to individuals and leaders to people. The conflict between creative dissent and intolerant militancy has a timeless relevancy, and Zapata deserves a close analysis both as a social statement and a work of art." "Any previously unpublished work of John Steinbeck is a welcome gift to American letters. This moving book combines two of the author's lifelong interests, his concern for the underdog and the artistic potential of the American film. Steinbeck Viva " --Budd Schulberg