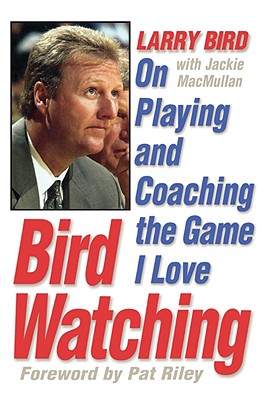 By: Larry Bird with Jackie MacMullan

On playing and coaching the game I love.

Larry Bird captured the imagination and admiration of basketball fans throughout his thirteen-year career with the Boston Celtics with his trademark style of creative, intelligent, exciting, and hard-nosed play. And then, last year in his rookie season as head coach of the Indiana Pacers, he infused the team with these same qualities -- and the results were remarkable. He turned around a slumping franchise and led the Pacers to the conference finals. To finish off a great season, Bird was named the NBA's "Coach of the Year" -- quite an accolade for Bird, who had never coached before and surprised many fans with his unusual and unorthodox coaching methods.
This book is a look into one of the greatest minds to have ever stepped on a hardwood court. Larry Bird shares his inner thoughts on basketball that to date only his Celtic teammates and Pacers players have been privy. From dissecting offensive and defensive strategies to assessing the talent of NBA players; from sharing the genesis of his coaching philosophies to how he deals with today's overpriced and temperamental players, it's all there. This book is Larry Bird's basketball playbook, and it's the one book every basketball fan will want to read.
Cover design by Tom Tafuri
Cover photograph by Glenn James/NBA Photos