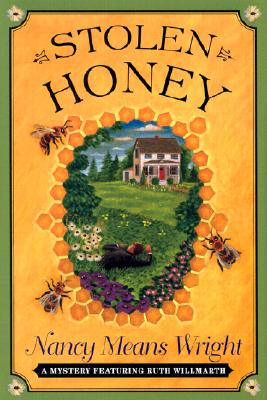 A mystery featuring Ruth Willmarth. Signed by the author on the title page.

Donna Woodleaf-LeBlanc and Emily Willmarth, both eighteen and in their first year of college, have looked down their noses at college football games and frat parties. So Gwen Woodleaf is surprised when her daughter announces that a frat party will keep them up late that evening. "The school is banning men-only fraternities next term," Donna explains, "so it's the last chance to get the "experience" of it."
The "experience," however, turns out to be a great deal more than the young women bargained for: the youth who drives Donna home on his motorcycle is found dead on the Woodleaf-LeBlancs' grounds the next morning. It is unclear how the young man, who had more than his share of alcohol the night before, died, and the police are asking questions.
To some of the local people, the family is suspect to start with. Russell, Donna's father, is part Abenaki and an actor who gets himself up in full Native American regalia and plays an eighteenth-century brave in frequent Revolutionary War reenactments. His wife, Gwen, has inherited Woodleaf Apiaries from her beekeeper father-- at least two hundred hives scattered about the New England countryside, requiring skill and attention if the honey crop is to bring in any money. Gwen is also the subject of gossip because she grows marijuana and belladonna for medicinal purposes.
Shep Noble's death begins to seem more and more like murder than accident, and his death and the LeBlancs' "differentness" incite anonymous threats and harassment from local troublemakers who make Donna's life miserable.
Desperate, she turns to a neighbor, and Emily's mother, Ruth Willmarth, as so many others of the community have done in the past. Ruth, abandoned by her husband, is struggling to raise their children and keep her farm going with little help and even less income. But that doesn't stop her from doing what she can to comfort Donna. She urges her persistent suitor, Colm Hanna, a funeral director and part-time police officer, to go more deeply into the mystery of Shep's death than his police colleagues are doing.
Meanwhile, Donna is researching a paper for her sociology class, weaving it around the story of her Vermont family, with its Native American and French Canadian roots. But tragedy dogs her when her sociology professor is strangled. As Ruth and Colm try to unravel the tangle of the two deaths, it becomes clear that both deaths, as well as the family history Donna is digging into, are coming together in a clashing climax that will leave none of the players unchanged.