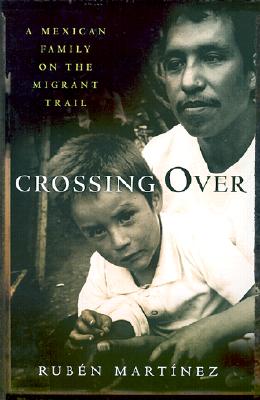 A Mexican family on the migrant trail. DJ unclipped.

A moving account of a family's odyssey by "one of the brightest voices of a new generation of Hispanic writers" ("Washington Post")
The U.S.-Mexican border is one of the most permeable boundaries in the world, breached daily by Mexicans in search of work. Yet the migrant gambit is perilous. Thousands die crossing the line and those who reach "the other side" are branded illegals, undocumented and unprotected.
In "Crossing Over," Ruben Martinez puts a human face on the phenomenon, following the exodus of the Chavez clan, an extended Mexican family with the grim distinction of having lost three sons in a tragic border incident. He charts the migrants' progress from their small south-Mexican town of Cheran through the harrowing underground railroad to the tomato farms of Missouri, the strawberry fields of California, and the slaughterhouses of Wisconsin. He reveals the effects of immigration on the family left behind and offers a powerful portrait of migrant culture, an exchange that deposits hip hop in Indian villages while bringing Mexican pop to the northern plains. Far from joining the melting pot, Martinez argues, the migrants--as many as seven million in the U.S.--are spawning a new culture that will alter both countries as Latin America and the U.S. come increasingly to resemble each other.
Intimate, compelling, written with passion and engagement, "Crossing Over" tells the epic story of a family, a town, a world in motion.