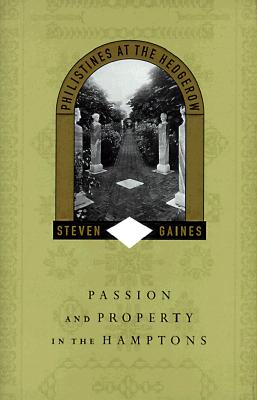 Philistines at the Hedgerow

Passion and Property in the Hamptons.

Steven Gaines is a bestselling storyteller with a special gift for capturing social nuance, colorful detail, and quirks of character. Just a few examples:
-- A well-to-do former ballet dancer arrested for stealing his neighbors' furniture -- and showered with thank-you notes from his victims, who admired his skills at refinishing
-- The aunt and cousin of a First Lady, who for many years inhabited a Gothic mansion with twenty-eight cats (and no litter box)
-- A locally prominent family who played host to Captain Kidd in 1699 and still have the buried treasure to prove it
-- The Oscar-winning actress whose tearful performance before a local zoning board failed to secure her a permit to build a swimming pool
-- A self-made man of outsized appetites who realized his ambition of becoming the most powerful real estate agent in the Hamptons -- and died choking on a piece of steak
-- The world-renowned painter who, at a black-tie dinner party, attacked his host's piano with an ice pick
-- As well as many of today's Hollywood, Wall Street, and fashion- and art-world potentates -- all vying for a slice of land still inhabited by families that have farmed and fished the region for generations.

Title: Philistines at the Hedgerow

Philistines at the Hedgerow