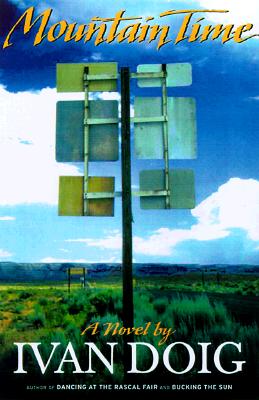 In his latest novel, Ivan Doig writes of a generation, shaped by the sixties, that has reached its time of reckoning, and of a man who must uncover the secrets of his father's past before he can live and love in the present.

One of the greatest writers of the American West, Doig exquisitely renders the natural beauty of its landscapes as he contrasts human time with the immense clock of the earth, measuring the briefer existences that are our human fate against the patient witness of the mountains. Set in Seattle, San Francisco, Montana, and Alaska, "Mountain Time" is the story of three intense relationships: between father and son, between sisters, and between lovers. At once complex and subtle, these oldest quandaries of kinship and love are all dramatically in need of resolution.

Mitch Rozier, who has spent half his fifty years writing an environmental column for an alternative west coast paper, finds himself back under his father's roof, caught up in the ordeal of obligation -- "you can't not go home again when someone is sitting there dying." The sisters Lexa and Mariah McCaskill wrestle with a past that has driven them away from domesticity and as far from their roots as they can get. Lexa has long been ready to settle down with Mitch; Mariah, a photographer who uses her camera to shield herself from the world, lands more reluctantly. And the figure from the generation that produced them, Mitch's father Lyle, both beguiles and exasperates as he attempts to rewrite events in his life before he leaves it.

Doig is masterful at illuminating both human and geographical vulnerability, constantly shifting our focus between the land -- breathtaking, essential and in needof protection -- and the people bonded to it.