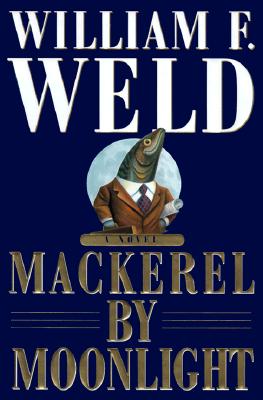 Signed by the author on the title page. Weld is the former governor of Massachusetts.

"Sometimes the good Lord closes one door and opens another."

"I was basically fired from my job as a federal prosecutor in Brooklyn, although old Tarzan was too smooth to use that word. Assistant U.S. attorneys do not get fired; they move on to other opportunities. I'll say this for the Justice Department, they bury their dead, they don't leave them out as carrion.

"The press had missed the ugly side of the story, but a couple of police reporters were nosing around. I decided the best way to snuff their interest was to get out of New York entirely."

Orphaned as a young boy and haunted by fragmentary memories of his father, Terry Mullally, the hero of "Mackerel by Moonlight", nonetheless has schooled himself to success. He makes a splash as an assistant U.S. attorney in Brooklyn but leaves under a cloud of suspicion after some dicey operations in which laws are broken and money changes hands.

Once he has escaped to Boston, to the safety of a white-shoe law firm, Mullally is again bitten by the political bug. Backed by a discontented police union and handled by two young politicos-- a labor organizer and a gossip columnist-- he charms and schemes his way to being elected district attorney, where the same combination of luck, smarts, and inattention to the nice ties of the moral code brings success and makes him a star. The twenty daily car rides that go with holding office are eased by thoughts of Emma Gallaudette, sweet and saline, brash, brainy, and unfortunately quite married. No matter. Like many of the obstacles in Terry's path, this proves to be a short-term problem.

As Emma observes, Terry is a man of many moods but only one tense: He lives life in the present. Terry likes to see people smoking nonfilter cigarettes or reading racing car magazines, because it means for once they're doing what they want.

It is not entirely clear whether Mullally is an eagle among chickens or a phony. His twenty-four-year-old campaign manager sums up politics for him:

"Boss, this whole process is calculated to make honest men act like felons. Sooner we all absorb that, the better."

Mullally's past, in the person of a Brooklyn cop, catches up with him at an inconvenient time-- when he seems to have a United States Senate seat in his grasp. His career, his love interest, and his life are all in danger, so with no hesitation he does what any businessman would do, just to preserve his options, his flexibility-- you understand.

"Mackerel by Moonlight" is a hilarious inside view of American politics, as seen by the iconoclastic two-term governor who once remarked, "You can lead the House to order, but you can't make it think." It is the funniest, most entertaining, fastest-paced novel since Christopher Buckley's "Thank You for Smoking" and Joe Klein's "Primary Colors".